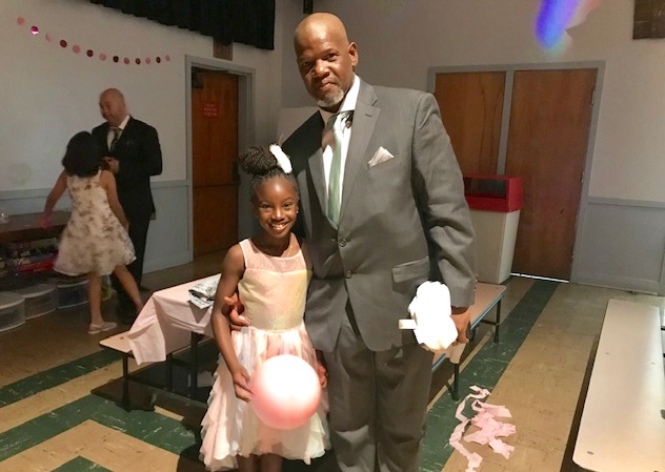 On Friday, March 22nd, St. Didacus School held its first-ever Father-Daughter Dance. What an evening it was! Organized by the St. Didacus Student Council, the dance included fathers and daughters from Kindergarten through the 5th grade, and for three full hours they danced, played games, ate pizza, and got to know one another in a non-academic setting.

The evening began promptly at 6:00 as the dads were welcomed by the members of the Student Council, and everyone was directed to the auditorium. While no real dress code was established ahead of time, most everyone followed the “Pretty in Pink” theme by wearing their best “formal dance” clothes. Every girl present wore some kind of dance dress, many of them a shade of pink, and most of the dads had on a nice suit, including some who also wore boutonniere. There was even one mother-daughter combination present, as one of the students’ fathers is away on military deployment.

After an hour or so of dancing, the Student Council served up the evening’s repast, which was a wonderful combination of pizza, a side dish or two of cookies and fruit, and a garnish of pink-colored candy. As the dads and daughters enjoyed the feast, they all got the chance to mingle with other students and fathers, and get to know others. Since it’s often the moms who are present for the daily school activities, this was a perfect way for the dads to get to know their daughters’ fellow classmates and their fathers.

Local DJ Sushi Brown acted as the Master of Ceremonies, and did not disappoint. He organized them all into groups and they played games, including one that quizzed them on how well the dads and daughters know each other: “What’s your daughter’s favorite TV show?” “What does your father like to do when he’s not at work on a Saturday?” They also had a Conga line, and each child who wanted to do so had a chance to come up to the microphone and say what she loved most about her dad. A couple of responses: “I love my dad because he gives me kisses.” “I love my dad because he brought me to this dance.”

The evening ended at 9:00, as the group of tired but happy dads and daughters filed out of the auditorium and headed home. Perhaps the best part of the evening for the faculty who was there was seeing how happy these young girls were to spend some time out on the town with their fathers. One day, not too many years from now, these St. Didacus girls will remember last Friday night as one of the best evenings they ever spent at school!