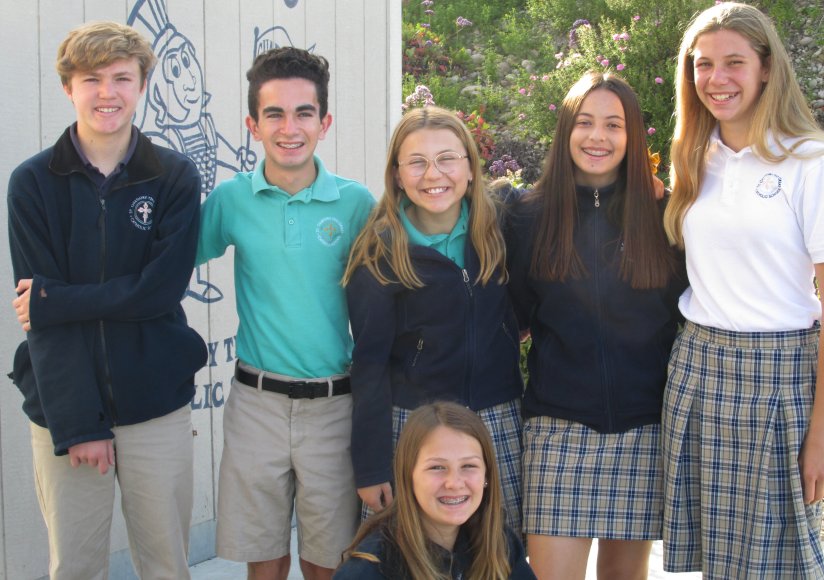 Seven of St. Gregory the Great Catholic School’s seventh graders were invited to the Greater San Diego Science and Engineering Fair in Balboa Park where their science projects were judged by scientists and professionals from their category’s field. Among this group of students Eva Lawson placed 4th with her topic “How Moisturizing Is Your Moisturizer?” Four of the students placed second with their projects: Jack Grissom’s “Metals Hot vs. Cold”, Sinclair McComic’s “Not White! What a Fright!!”, Emily Salazar’s “Bacterial Growth in Water Bottles”, and Claire Scelfo’s “Orange You Glad There Is Vitamin C?” In addition, Shane Martin (“What Does Fido Know?: A Cognitive Study”) and Lilli Lawrenz (“Temperature: Do Windmills Care?”) both placed first in their categories. Jack Grissom also received a professional award from the American Society of Materials, San Diego Chapter, while Lilli Lawrenz was acknowledged by the Association of Women in Science, San Diego Chapter with an additional award. Special invitations were extended to Lilli to participate in the California State Science and Engineering Fair in Los Angeles in April, and the Broadcom Masters Competition in Washington, D.C. in October. When asked how she came up with her topic, Lilli responded, “I chose to research windmills when I was travelling over the summer. I wondered why there were so many windmills in some places, but not in others.” She is looking forward to competing in L.A. and D.C. 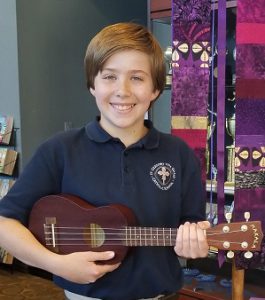 The Missionary Childhood Association’s annual song writing contest awarded 6th grader, John Perry Wishchuk, first place for his original composition “Children Helping Children.” John Perry performed his award winning song at the MCA Mass at Our Mother of Confidence Church. “I was surprised, but happy, to hear I won. I’ve written songs before, but this was the first one I entered in a competition.” J.P.’s song now goes on to the national level. Good luck, Lilli and John Perry as you go forward with your award-winning projects! The future looks bright with young scientists and songwriters such as these.

We'd love to meet you.

Schedule a tour at any nearby Catholic School.