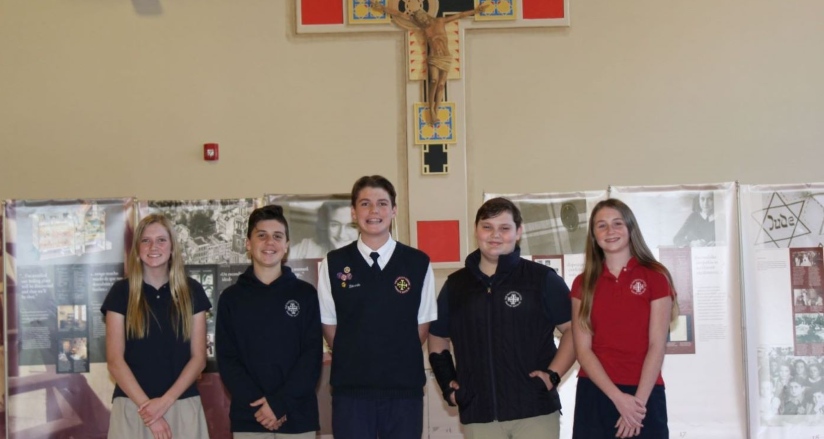 The story of Anne Frank has inspired millions of people around the world. It is a story of discrimination and exclusion, as well as hope and determination. The themes found in her diary still pertain to our modern world. The Consulate General of the Netherlands partnered with the Anne Frank House in Amsterdam to bring a mobile educational exhibit based on the life of Anne Frank to select venues throughout San Diego. The Nativity School was proud to have been selected as one of eight area middle and high schools to host “Anne Frank, A History for Today”.

Five Nativity eighth graders were trained as docents to guide visitors throughout the exhibit over a one week period in January. Our student docents walked students, parishioners, parents and community members through the 34 panel exhibit examining the rise of national socialism in Germany, the Holocaust, the Frank family history and the story of Anne Frank and her diary. The exhibit closed with a look at antisemitism and hate groups in America, along with ideas on what students can and must do to avoid a repeat of this horrific chapter in world history.

The students were included in a reception and viewing of the exhibit at the Timken Museum on February 6th and recognized with a Certificate of Special Congressional Recognition by Congressman Scott Peters’ office for their work in raising awareness of Anne Frank’s inspiring and relevant story. Special thanks to Honorary Consular to the Dutch Consulate Henk Henselaar for his guidance and support throughout the training and exhibit. Holocaust survivor Rose Schindler will speak to the students at an assembly on March 6th to bring the exhibit experience to a close for our students.