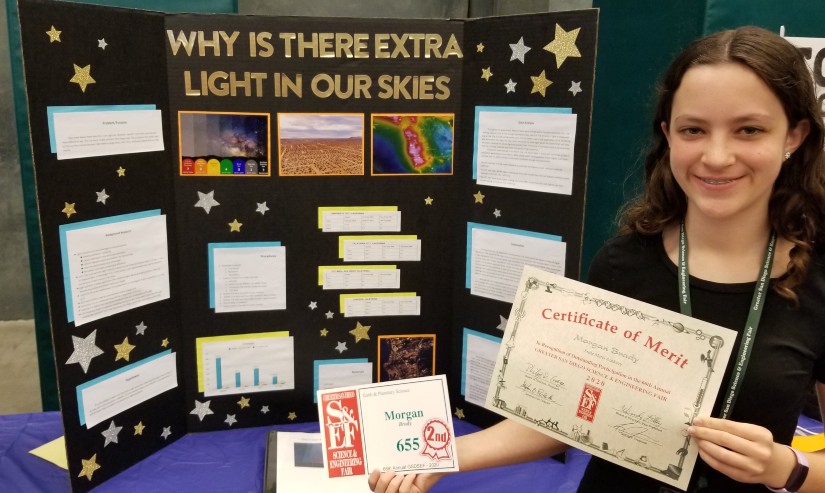 Morgan Brady and Sofia Ayesta-Hollstein, Stella Maris Academy eighth grade students, each took home second place for their science fair projects at this year’s 66th Annual Greater San Diego Science and Engineering Fair. The science fair was scheduled for the week of March 10th-15th, but shortly after the students’ set-up their projects, the event was postponed as a result of the global COVID-19 pandemic, with some of the competition being completed by video.

Sofia’s award-winning project, “The New Water Solution”, was entered in the division of Engineering: 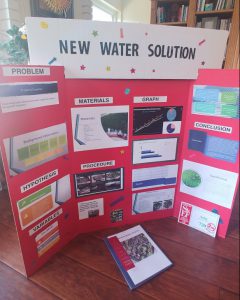 Materials & Bioengineering with her question, “Does solar-desalinated water negatively impact the growth of plants?”. After outlining her hypothesis, variables and procedures, Sofia graphed her results and conclusions. Sofia’s mom, Veronica, said the judges were very impressed that Sofia’s “project could be easily replicated to help bring clean water to other communities worldwide”.

Morgan’s award-winning project, “Why is there Extra Light in our Skies?”, was entered in the Earth and Planetary Science division where Morgan outlined the problem and purpose of her project, the hypothesis, her research and procedures, along with data analysis, conclusions and the significance of her work.

“Sofia and I are both excited to have received these awards!,” said Morgan. Mrs. Adrienne Jones the students’ teacher said, “The girls worked diligently on their projects starting in October. I am so proud of their conscientious and assiduous efforts.” Morgan and Sofia were two of over 880 students who submitted projects to be screened into the Greater San Diego Science and Engineering Fair, with over 700 students who were recommended to participate in the Fair. Over 250 judges decided the awards in sixteen different categories of projects on the following criteria: by project displays, by interviewing students, and/or reading notebooks and display boards and, if submitted, viewing student-made videos.

In addition to winning second place at the Science Fair, Morgan received several other awards for her project. Last week, Morgan presented her project to the San Diego County Chapter of the International Dark Sky Association and the Astronomy Association via a Zoom meeting, with approximately 60 people attending. Sandy Brady, Morgan’s mom said, “the associations said that Morgan did a great job in her presentation and in responding to follow-up questions. We are super proud of her, and she is very excited.” Morgan received first place and $100 from The Dark Sky Association competition; fourth place and $75 from the San Diego Astronomy Association competition; and, an Honorable Mention from the Sigma Xi Scientific Honor Society.

Stella Maris Academy, the parish school of Mary, Star of the Sea Catholic Church, is a transitional-kindergarten through 8th grade co-educational Catholic school in the Village of La Jolla. Children at Stella Maris thrive in a warm and welcoming, friendly and safe environment. For nearly 75 years we have provided academic excellence in a nurturing environment by our talented and dedicated staff. For more information, or questions about enrollment, please call 858-454-2461.